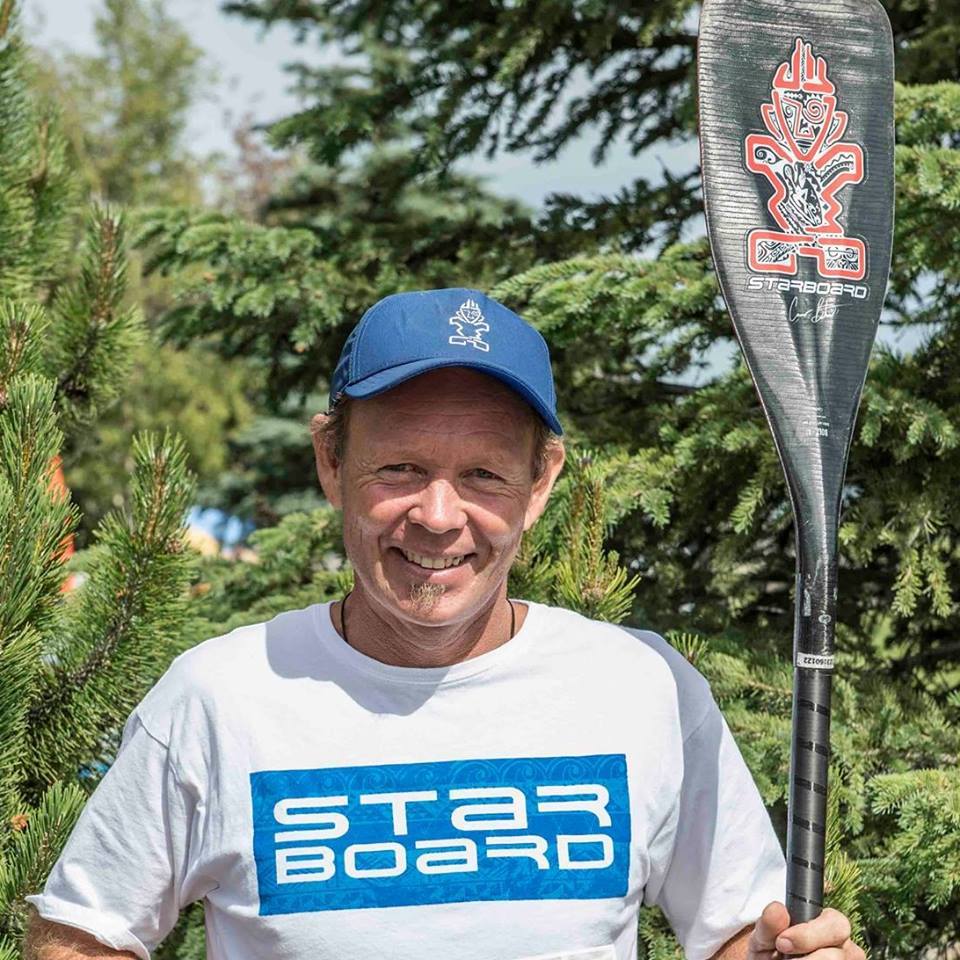 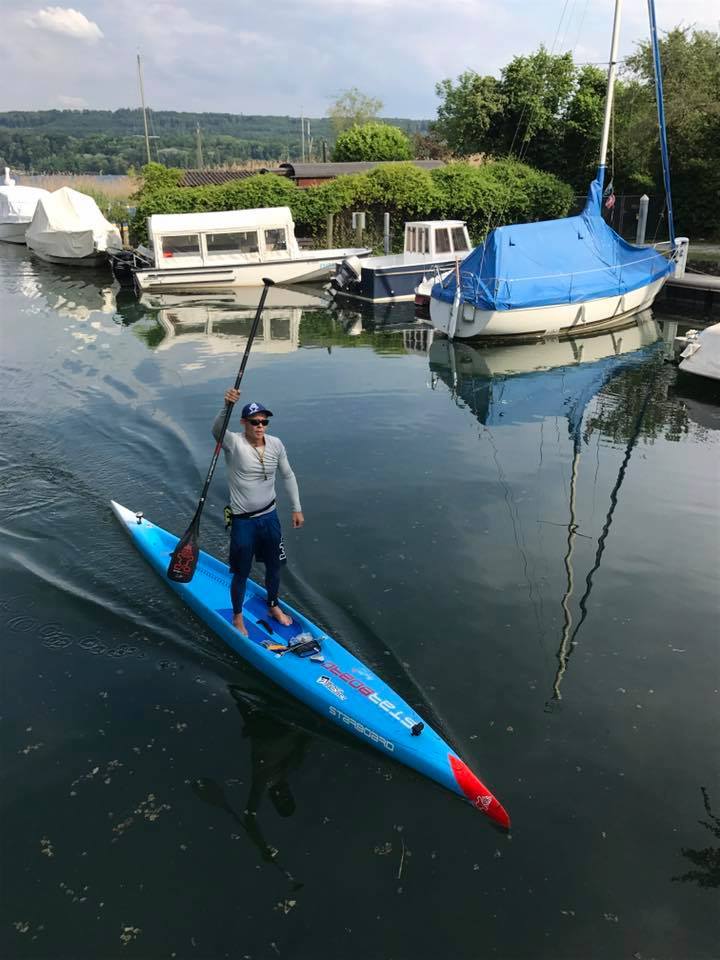 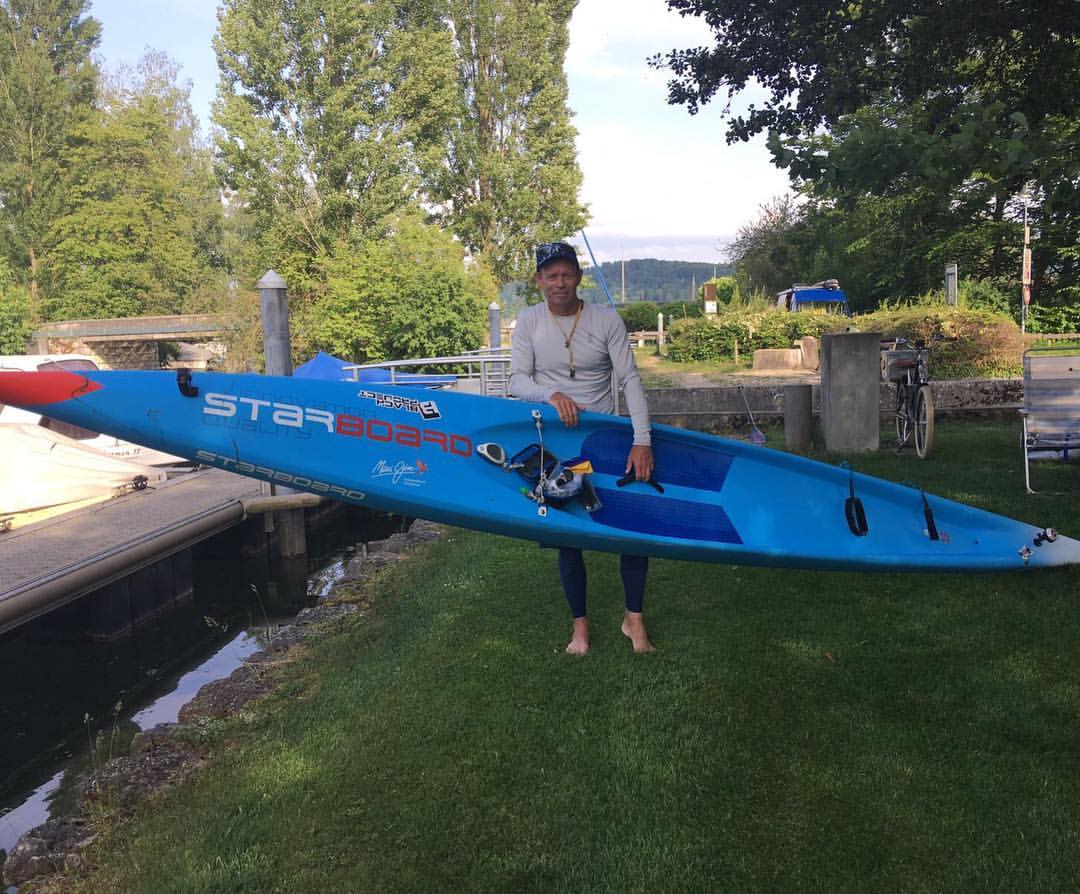 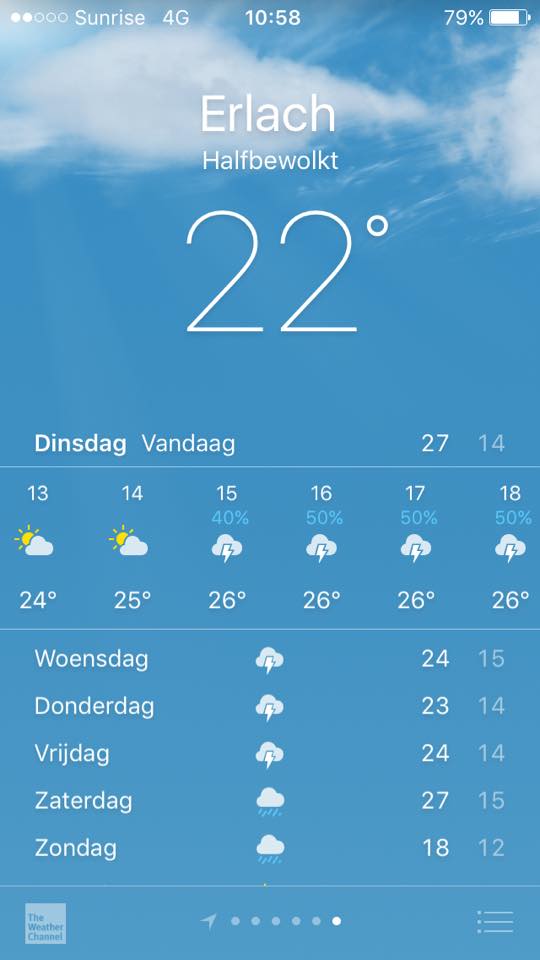 Congratulations Bart de Zwart – the new 24 hour long distance world record holder!
(Read the FULL CAPTION below for more insights…)
Watch this short clip to hear what Bart had to say right after he got off the water in Switzerland after completing a mammoth 193.8 kms (123.4 miles) by paddling all night and all day.
Bart started at 5pm Monday and finished just before 5pm this evening, paddling roughly 19 laps of a 10.5km loop and battling thunder, lightning and strong winds that held him back from his ultimate goal of 200km but couldn’t stop him setting a new record. As he says in the video: “Considering the wind, I’m really stoked that it worked out.”
Chris Parker (SUP Racer) has chatted with Bart on the phone to got some additional insights into just how tough this record attempt became, with the new world record holder generously sharing his time despite not having slept in over 36 hours. The four-time 11 City Tour champion was expecting calm conditions but the wind was really strong, so at times he was paddling well below record pace.
“The wind was changing direction every 20 minutes, the conditions were really strange. About 6 hours into the attempt, just before midnight, the wind was so strong that I was worried I wouldn’t make it. If the wind had continued like that I probably would have been forced to abandon. It was definitely a stressful moment.”
Bart explained that while his thoughts tend to become philosophical during his famous SUP expeditions and crossings, with this particular attempt he was almost exclusively focused on how fast he was going.
“I basically just kept looking at my speed the whole time. It’s not like in a race where you can take a break at the back of a draft train or slow down if you have a big lead. With the 24 hour record, every second you lower your pace or stop paddling is going to hurt you at the end. You’re literally racing the clock. You really have to stay focused.”
Bart broke the previous record of 179.99 kms that was set in January by his good friend Joanne Hamilton-Vale (who set both the men’s and women’s records and still holds the latter). In a fitting touch, Jo was in Switzerland as part of Bart’s support team.
Today’s achievement and Joanne’s effort in January follow previous 24 hour world records by Robert Norman and Seychelle Hattingh. It will be interesting to see who attempts this incredible feat next. Any volunteers?
Bart was paddling a modified 14×21.5 production Starboard Sprint. He added approximately 2ft to the nose and tail to make it an 18×21.5 unlimited, telling me that the main benefit wasn’t so much additional speed but superior efficiency.
Follow Starboard Stand Up Paddle Surfing for more insights, and stay tuned for more in-depth coverage of this amazing effort on SUP Racer in the next couple of days.
Congratulations Bart – you are an inspiration.

World Record 2017. After 23 hours and 56 minutes of paddling the final distance paddled by Bart de Zwart was 193.8km.

Sorry for the delay. It got a bit emotional. AND data signal keeps failing me.
After 23 hours and 56 minutes of paddling the final distance paddled by Bart de Zwart was 193.8km.
The World was backing the gentleman of SUP and he values all the support.
NOW WHAT WILL BE NEXT

World record is now broken by Bart de Zwart. Will Let you all know his final mileage at the end of his lap closest to 24 hours
He has had, wind, thunder, lightning, incredible heat. The World knew he would break this record

22:08 hours and Bart is at 179km. He is 1km away from breaking the Men’s 24 Hour World Record on flat water. He is continuing to paddle and will be finishing in almost 2 hours

16:32 and 137km for Bart de Zwart in his 24 hour World record attempt on flat water. The wind is still light. Thankfully, as it was bad for the first 10 hours.
His last 6 hours have been the same speed. He seems to have found a good rhythm and pace in the last 6 hours and keeping his heart rate low.
He is on his way to make history AGAIN

It has been a long dark night and one of the laps was crazy windy. Wind dropped 4 hours ago and since then his laps have been consistent in time. At 12 hours and 39 minutes he has completed 105.4km and Bart de Zwart now has low wind and daylight for the rest of the challenge.
More than half way through

The wind has been pretty bad for Bart de Zwart. The last lap he had crazy wind, which slowed him. He paddled past without stopping and will come in for hydration and food on the next lap.
The wind has finally dropped and is forecast to now stay like that.
He is still averaging 8.7kph over the last 8 hours and I think that will pick up if the forecast is correct.
He is paddling strong and is keeping mentally strong.
The current male averaged 7.46kph. So Bart is many kilometres ahead and the weather is starting to be kind

3 hours 24 minutes in to the 24 hour World record attempt by Bart de Zwart for the longest distance paddled on flat water. He has completed 32km and has had to deal with messy wind, rain, thunder and lightning. The storm has now passed and the wind is dropping.
He is pacing himself at 8.9kph and is looking great 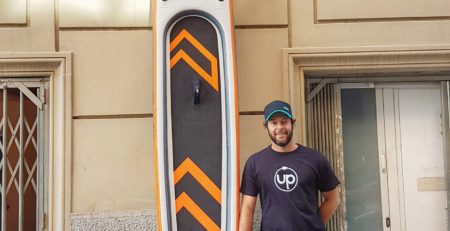 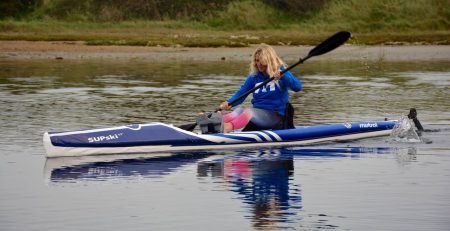 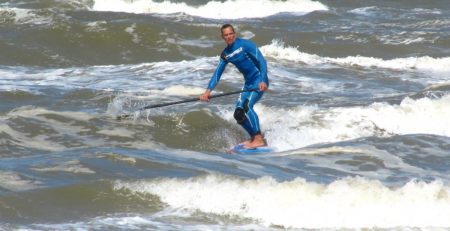 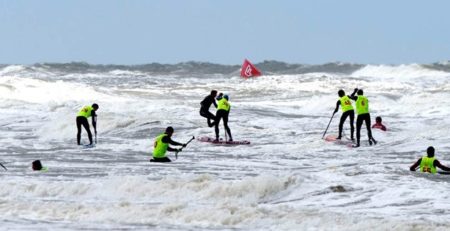